The Basics of Diabetes


Diabetes is a disease in which the blood sugar levels are above normal. Most of the food we eat is turned into glucose, or sugar, for our bodies to use for energy. The pancreas, an organ which lies near the stomach, makes a hormone called Insulin to help glucose get into the cells of our body. When you have Diabetes, your body either does not make enough or adequate Insulin or it cannot used it's own Insulin correctly. This causes sugar to build up in your blood.

High Blood sugars can damage body organs and cause tissue damage. High blood sugars pass through the kidneys and causes a larger than normal volume of urine, which can lead to an increase in thirst. Although the sugar in the blood is high, it cannot be used for energy by the body. This is one of the reasons why people with poorly controlled blood sugars may loose weight.

Diabetes is a disorder of metabolism, the way the body uses digested food for energy. The digestive tract breaks down carbohydrates, sugars and starches, found in many foods, into glucose, a form of sugar that enters the blood stream. With the help of the hormone insulin, cells throughout the body absorb glucose and use it for energy. Diabetes develops when the body doesn’t make enough insulin or is not able to use insulin effectively, or both.

Insulin is made in the pancreas, an organ located behind the stomach. The pancreas contains clusters of cells called islets. Beta cells within the islets make insulin and release it into the blood. 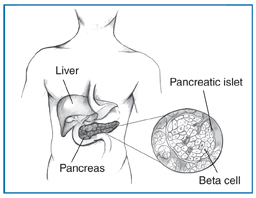 If beta cells don’t produce enough insulin, or the body doesn’t respond to the insulin that is present, glucose builds up in the blood instead of being absorbed by cells in the body, leading to prediabetes or diabetes. Prediabetes is a condition in which blood glucose levels or A1C levels, which reflect average blood glucose levels — are higher than normal but not high enough to be diagnosed as Diabetes. In Diabetes, the body’s cells are starved of energy despite high blood glucose levels.

The Complications of Diabetes


Diabetes increases your risk for many serious health problems. If you choose to follow the advice of your Health Care team, all of these can be prevented, or delayed.

Long-term complications of diabetes develop gradually. The longer you have diabetes — and the less controlled your blood sugar — the higher the risk of complications. Eventually, diabetes complications may be disabling or even life-threatening. Possible complications include:


The key to delaying or avoiding complication is learning how to control your bllod sugar. All of these complications can be avoided, or their onset greatly delayed, by learning how to keep your blood sugars in a safe range and you will learn how to do this as you progress.

The Economic and Statistics Impact of Diabetes in the United States: 2013-2013.

The rates of diagnosed diabetes by race/ethnic background are:

The breakdown among Asian Americans:

The breakdown among Hispanic adults:

Diabetes may be underreported as a cause of death. Studies have found that only about 35% to 40% of people with diabetes who died had diabetes listed anywhere on the death certificate and about 10% to 15% had it listed as the underlying cause of death.

After adjusting for population age and sex differences, average medical expenditures among people with diagnosed diabetes were 2.3 times higher than what expenditures would be in the absence of diabetes.